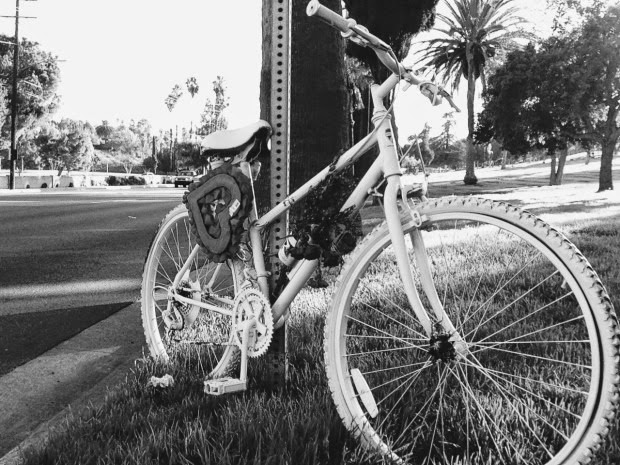 On a trip back home to visit my parents I was driving down a very familiar highway about to take my exit when I noticed to my right a white painted bicycle up on a chain link fence. My heart sunk a little when I made the connection to what had happened there. My mother had called me a few months earlier to tell me about a tragedy that occurred in our community. I am sure we have all seen a roadside memorial placed to commemorate a site where a person died suddenly and unexpectedly, but this one was different than anything I had seen before. This white painted bicycle represented the death of a cyclist who had been hit by an SUV that lost control while making a lane change, went off the road, up a grassy embankment and through a chain link fence before flipping over onto a group of riders.
I later learned that what I saw was a ghost bike; a bicycle set up as a roadside memorial in a place where a cyclist has been killed (usually by a motor vehicle) which also acts as a reminder to passing motorists to share the road. The first recorded ghost bike was in St. Louis Missouri, in 2003. After witnessing a motorist strike a bicyclist, Patrick Van Der Tuin placed a white-painted bicycle on the spot with a hand-painted note, “Cyclist Struck Here.” It became a powerful reminder to the community about safety, and has become a way to commemorate the one lost.